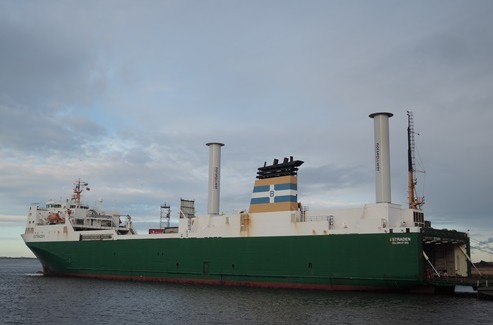 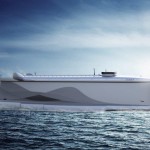 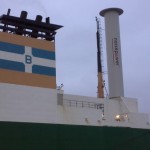 Norsepower video of the installation procedure with CEO Tuomas Riski Interview (sound track in Finnish) can be seen here:
http://www.ts.fi/uutiset/kotimaa/706180/Moderni+purje+tyontaa+rahtilaivaa

Norsepower – Brief presentation of the rotor installation including a video from the sea:
http://www.norsepower.com/rotor-sail-solution/Reference%20installation

– An international association has been created to facilitate and promote wind propulsion for commercial shipping worldwide.

IWSA will facilitate and promote the technology, applications and general concept of wind propulsion for the global commercial shipping industry and bring together all parties interested in catalysing the development and uptake of these technology solutions. The IWSA will also play a key role in acting on behalf of our members and supporters within this sector in order to shape industry, regulators’ and international bodies’ perception of the concept of wind propulsion.

A great deal of support has been received for the IWSA since its initial inception; thus far 50 members and supporters have registered and the organisers expect those ranks to swell in coming months following the successful inaugural annual general meeting for the association, held in October.

“Our goal is to be an advocate for the development of wind propulsion solutions in the industry, whether retrofit, wind-assisted, new builds or wind as the primary propulsion source. We recognise and applaud the efforts of the industry to reduce emissions, the increased interest in renewable energy sources and the gradual changing perceptions about wind propulsion.”

Allwright continued, “With the help of our members, supporters within the industry, academia and other stakeholders, IWSA will be sending out a clear message: wind propulsion is a serious and increasingly proven option, financially a win-win situation and we are here to work with an industry ready for change.”

It was at the Carbon War Room’s Creating Climate Wealth Summit, late 2012, in Berlin that several representatives from the wind-assisted shipping sector came together to tackle the ongoing issues facing this highly innovative and increasingly relevant sector: isolated actions, lack of collaboration and limited sharing of knowledge.

To address all of these issues, strong collaboration between and cohesion of the actors involved in the wind propulsion sector is imperative and the formation of IWSA heralds a great advance in this sector.

The objectives of IWSA include:
• Network – create a clear sectoral approach, grouping like-minded organisations and individuals that can share ideas, skills, as well as technical and market information for the development of commercial wind-ships.
• Promote – promote the economic value of wind propulsion to the industry
• Incubate – assist in securing funding streams, project collaboration, grant applications, research and the pooling of resources.
• Educate – act as a central information hub for the wind propulsion sector, ship owners and operators, shipyards, ports, governments, equipment producers, the media, NGOs, and the general public.
• Facilitate – initiate the establishment of common approaches/criteria for all stages of wind propulsion projects, advise stakeholders and lobby legislative bodies on policies, activities, funding and incentives required to retrofit existing ships and build new commercial wind-ships.

IWSA has been established in the UK as an unincorporated, not-for-profit entity.

Membership of IWSA is available to companies and organisations involved in the marine wind propulsion sector along with associate members and supporters that share our vision coming on board from the wider industry, academia, non-profit sector etc.

About B9 Shipping: B9 Shipping addresses the economic and environmental challenges facing shipping by creating a whole system solution that is commercially irresistible to targeted cargo owners and aims to be 100% renewable powered and zero waste. We provide long term fixed price ‘logical logistics’ shipping service to end-users. B9 Ships are 21st century small (up to 15000 tonnes) sailing hybrid cargo vessels. They combine proven soft sail technology adapted to an industrialised automated square rig sail system known as the FAST rig, with an off-the-shelf Rolls-Royce LNG Bergen engine powered by waste derived liquid biomethane (LBM). Up to 50% of the propulsion comes from wind.
www.b9shipping.com

About Seagate Sail: Seagate has developed two new patented technologies to convert first wind into driving force through an automatic, collapsible, efficient delta wing sail and next to covert driving force into fuel saving through a cruise control that allow to lift the foot from the accelerator without losing speed.
www.seagatesail.com

About Energy Ship: The world is full of wind and how can we transform the wind energy into usable energy forms as LNG or Hydrogen is one of the key questions for a clean energy supply for the future. Energy-Ship is a LNG/Hydrogen producing entity that “goes where the wind is” and delivers its production to multiple users (e.g. ship, ports) in transportable tanks. Energy-Ship is a real Off-Shore production system. Contact: sm@mantour.eu

About Modern Merchant Sailing Vessel: – Since the early Eighties Capt. Hartmut B. Schwarz developed the innovative idea of DynaRig by Wilhelm Prölss and constructed the Pinta-Rig – named after the first modern technology passenger sailing ship. Unfortunately due to the bankruptcy of the Bremer Vulkan Yard, the Pinta has never been built, but Capt. Schwarz kept on the line and created SS Bulker 1 – a panamax size bulker for iron ore.
www.modern-merchant-sailing-vessel.com Contact: sm@mantour.eu

About Propelwind: A R&D/Engineering company, established in 2011, developing wind propulsion solutions for ships, based on the technology from sail racing: new build and conversion, main propulsion and assistance to propulsion. The main focus is on rigid articulated wingsail but able to handle any “wind engine”. Performance calculation including routing, ship definition, wind engine integration, initial engineering and support to ship owners and charterers.
www.propelwind.com

About Fair Winds Trading Company: Developing an ethical and sustainable method of international and intercontinental trading through the ecological transportation of fairly traded goods that support bio-diversity. Designing a prototype vessel that is fast, manoeuvrable and able to carry a payload; while being simple, economic and ecological to build.
www.fairwindtradingcompany.org