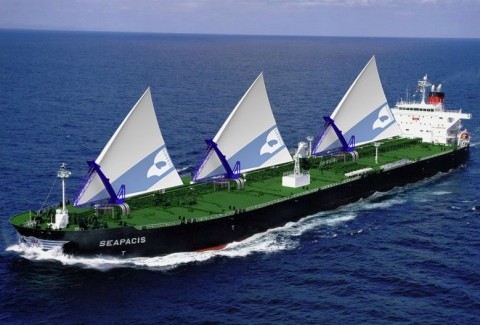 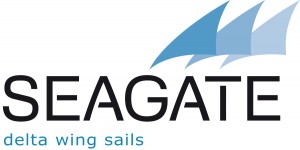 Seagate offers a new solution for the marine industry to convert wind power into fuel saving.

It is clear that the collapsibility, automatic operation, structural and aerodynamic efficiency of the Seagate rig may have application in commercial ships, and the industry is beginning to look seriously at natural propulsion systems as part of its drive to minimise costs and meet emissions regulations.
For example Wallenius & Willemsen have an objective to achieve a zero emission vessel by 2050.
You can see the logic, currently they spend approximately $600 million per year on fuel.

This “long term” approach is in line with other industry members where a step by step approach will be adopted. Hybrid propulsion, combining a thermal engine augmented by wind assistance seems a logical first step given the financial constraints the industry operates under. It seems unlikely that a new breed of fully wind powered ships will suddenly be adopted by a trading infrastructure that has grown up to expect rapid and reliable delivery. The adoption of kites and Flettner rotors for some projects confirms the validity of this assumption. Much more so than in leisure applications the owner is focused on the bottom line. Nothing will happen without the prospect of payback in 3-5 years, and even where funding subsidies are available. There are some niche operations where the normal rules of financial viability can be waived, for example the Enercon “E-ship 1”, where funding can be found for a ship that is part of projecting a wider business vision.

The data presented in the paper demonstrates that a Seagate Sail system may be employed to generate meaningful savings in fuel consumption. Whilst the analysis has been based on some simplifying assumptions, given the development of wind forecasting and optimal routing systems it would seem that this simple simulation is pessimistic. In a real scenario the vessel could be routed to capture zones of favourable wind to increase the amount of time the sails can be set, even if a slightly longer track is sailed.

Also it may be that the immediate impulse to reduce the maximum vessel speed is not correct. The vessel does not have to steam at maximum speed, but having that speed available for short bursts to escape inclement weather or move quickly to catch a zone of favourable wind may be a more commercially attractive option.

Based on the analysis presented here the pay back period for investment in such a system, based only on fuel cost savings at today’s rates is 3-4 years.

The author acknowledges the considerable practical hurdles to be overcome before such systems can be contemplated for retro-fit to existing ships or incorporation in new build proposals. The next step in the Seagate development process is the construction of a 15 m prototype vessel that can be used to validate the mechanical engineering designs embodied in the current proposal.