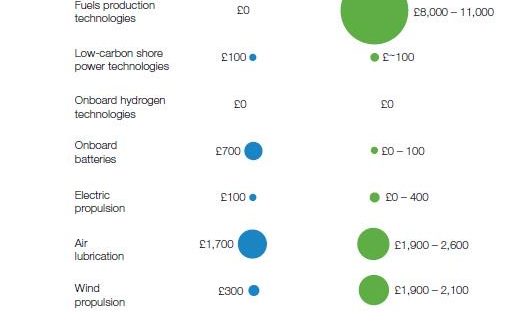 There has been a steady growth in market interest for wind propulsion solutions. This market interest has been driven by a number of key factors, including the IMO initial strategy on reducing GHG emissions in shipping by at least 50% by 2050, but also by market leaders taking zero emissions stances, including Maersk’s pledge to cut carbon emissions to zero by 2050.

The UK Government’s Clean Maritime Plan (released in July 2019), has assessed the global market for wind propulsion systems, and this is estimated to grow from a conservative £300 million per year in the 2020s to around £2 billion per year by the 2050s worldwide. 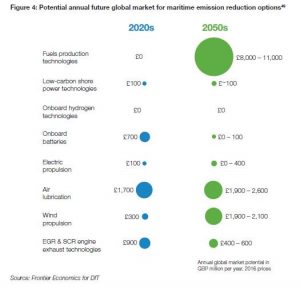 The Frontier Economics Report (July 2019)  REDUCING THE MARITIME SECTOR’S  CONTRIBUTION TO CLIMATE CHANGE AND AIR POLLUTION: Economic Opportunities from Low and Zero Emission Shipping. A Report for the UK Department for Transport  adds further detail (page 43-44), forecasting that the market size by 2050 (assuming 50-100% abatement of GHG) for wind propulsion would be 37,000 – 40,000 vessels with wind propulsion systems installed or roughly 40-45% of the global fleet.

The market potential for wind propulsion was also assessed in an EU commissioned report produced by CE Delft and associates. ‘Study on the analysis of market potentials and market barriers for wind propulsion technologies for ships’. [Note: This report was compiled in 2016-17 prior to much of the SOx regulation uptake and over a year before the IMO GHG initial strategy adoption]

The headline findings were: ‘Should some wind propulsion technologies for ships reach marketability in 2020, the maximum market potential for bulk carriers, tankers and container vessels is estimated to add up to around 3,700-10,700 installed systems until 2030, including both retrofits and installations on newbuilds, depending on the bunker fuel price, the speed of the vessels, and the discount rate applied. The use of these wind propulsion systems would then lead to CO2 savings of around 3.5-7.5 Mt CO2 in 2030 and the wind propulsion sector would then be good for around 6,500-8,000 direct and around 8,500-10,000 indirect jobs.’

This would be a significant low carbon technology penetration into the fleet, and these calculations were made prior to significant regulatory decisions made over the last 18 months. As it currently stands, there are a number of ready for market wind-assist technology providers in the retrofit market, with an increasing number of retrofit installations of proven rotor technology and test rigs and a growing number of other retrofit technologies and newbuild designs are in late stage R&D or moving towards sea trials.

As we approach 2020, there are significant market drivers that are will influence the price of fuel and the availability of compliant fuel worldwide. Oil prices have seen a drift upwards over the last couple of years with a subsequent gradual increase in bunker prices, the world sulphur directive will come into force in 2020 and could lead to a significant increase in costs either ULSFO, standard HFO + Scrubbers or a switch to either lighter distilates, LNG or other more costly fuels. The IMO has also sent a clear industry decarbonisation message with it’s agreement on preliminary GHG targets in April 2018, of at least 50% cuts (from a 2008 baseline) by 2050. This target may well be tightened further and a raft of short term and long term measures including some form of carbon levy or other market based mechanisms being introduced in 2023.

The possibility of mandated speed limits, an HFO ban in the Arctic and the further development of credible and viable hybrid wind and secondary renewable fuel solutions are also having an impact on the industry in it’s search for the next generation technology toolbox. With the development of innovative finance models, where CAPEX is reduced significantly or eliminated completely, there will be increased interest to utilise a technology segment that can deliver 5-20%+ reductions in fuel (and GHG emissions) for retrofit and from 30% and above for optimised new build vessels.

While shipping is currently not included in carbon pricing mechanisms, many of our customers are and some form of carbon pricing system will most likely be seriously considered as IMO debates the longer-term measures over the next 2-3 years. There has been a significant upward pressure on the price of carbon on the EU ETS and the indications are that this upward pressure will continue, with the price increasing from 7 euro to over 20 euro per ton of C02 in 2018 and that has continued to rise to 26 euro in the first 6 months of 2019.  [1 tn of fuel = c.3.1 tn of CO2]

Combining wind propulsion technologies with secondary renewables such as 2nd generation biofuel (derived from waste), batteries, hydrogen or ammonia etc., and a suite of ship efficiency  technologies can deliver significantly reduced carbon shipping, putting the industry on a path towards full decarbonisation, even under tight GHG emission reductions scenarios.

• According to the International Chamber of Shipping (ICS), around 90% of global trade is carried by sea. Shipping & World Trade (ICS).

• UNCTAD forecasts world seaborne trade to increase by 2.8 per cent in 2017, with total volumes reaching 10.6 billion tons. Projections for the medium term also point to continued expansion, with volumes growing at an estimated compound annual growth rate of 3.2 per cent between 2017 and 2022. Cargo flows are set to expand across all segments, with containerized and major dry bulk commodities trades recording the fastest growth.2013 – total volume of seaborne trade grew at a rate of 3.8% and totalled nearly 9.6 billion tons.  UNCTAD Review of Maritime Transport (2017)

FAO: the State of the World Fisheries & Aquaculture